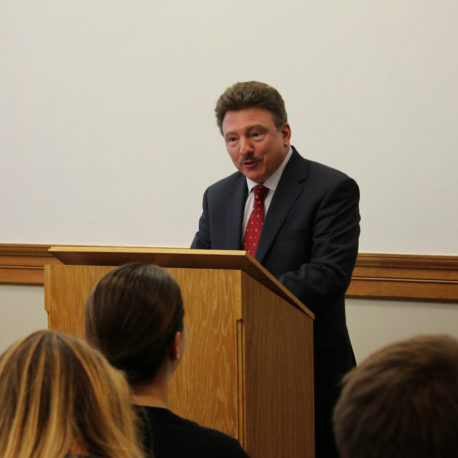 David Hamod is President and CEO of the National US-Arab Chamber of Commerce (NUSACC). Since its inception almost 50 years ago, NUSACC has been the preeminent organization for fostering trade and investment between the United States and the 22 countries of the Arab world.

Mr. Hamod has been a prominent and active member of the U.S. business community for more than two decades. In 1988, he founded Intercom International Consultants, a Washington‐based consulting firm that has served as an advisor to numerous business groups, including more than 30 U.S. companies. As President of Intercom, Mr. Hamod served on the International Policy Committee of the U.S. Chamber of Commerce for more than a decade.

Prior to founding Intercom, Mr. Hamod worked for the Brookings Institution, International Business Machines (IBM) Corporation, Overseas Private Investment Corporation (OPIC), and The New York Times, among others. As U.S. Representative of the American Business Council of the Gulf Countries (ABCGC) for more than 15 years, Mr. Hamod served as the Washington‐based voice of the American business community in the Arabian Gulf. He played an instrumental role in the success of the U.S.‐GCC Business Dialogue, for example, as well as the U.S.‐GCC Standards Cooperation Program.

Mr. Hamod has testified before the U.S. Senate and U.S. House of Representatives on numerous occasions, and he has been interviewed on business competitiveness issues by NPR, CNN, CNBC, C-Span, Financial Times, and many others.

As a result of his active role in the U.S. private sector, Mr. Hamod has developed expertise in transparency and best commercial practices. As a consultant to the Development Center of the Organization for Economic Cooperation and Development (OECD), which is playing a lead role in promoting good business ethics internationally, Mr. Hamod served as a liaison to such groups as Transparency International, World Bank Group, and the U.S. Agency for International Development.

​In recent years, Mr. Hamod has held leadership positions in and/or served as a consultant to such business organizations as: The Greater Washington Board of Trade; the American Chambers of Commerce in Egypt, Lebanon, and Canada; World Federation of Americans Abroad; Small Business Exporters Association; the Center for International Private Enterprise (CIPE). He has also served in a leadership capacity at the Middle East Policy Council, the U.S. Center for Citizen Diplomacy, and American Near East Refugee Aid (ANERA).
​
Mr. Hamod is a graduate of the Johns Hopkins University School of Advanced International Studies (M.A.) and the University of Iowa (B.A.). He was selected as the University of Iowa’s “Distinguished Young Alumnus” for 1999‐2000 and, ten years later, the U.I. Honors Program chose him as its first “Outstanding Alumnus.” A member of Phi Beta Kappa Honor Society, Mr. Hamod has been the recipient of 15 scholarships, two of which took him to Yale University and the American University in Cairo, Egypt