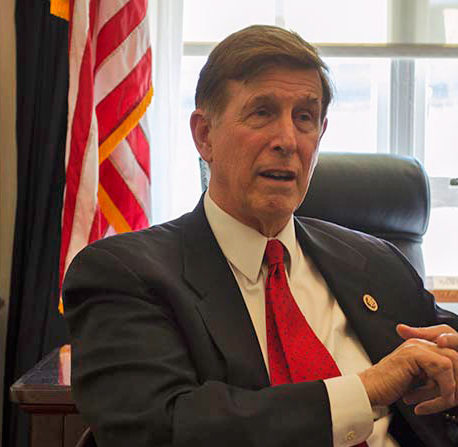 Congressman Don Beyer is serving his third term as the U.S. Representative from Virginia’s 8th District, representing Arlington, Alexandria, Falls Church, and parts of Fairfax County. He serves on the House Committees on Ways and Means and Science Space and Technology, and is a member of the New Democrat Coalition. He was the Lieutenant Governor of Virginia from 1990 to 1998, and was Ambassador to Switzerland and Liechtenstein under President Obama.

Rep. Beyer’s signature work as lieutenant governor included advocacy for Virginians with disabilities and ensuring protections for Virginia’s most vulnerable populations as the Commonwealth reformed its welfare system in the mid-1990s. Rep. Beyer was Virginia’s Democratic nominee for governor in 1997.

After leaving office, Rep. Beyer spent fourteen years as Chair of Jobs for Virginia Graduates, a highly successful high school dropout prevention program, and was active for a decade on the board of the D.C. Campaign to Prevent Teen Pregnancy. As Chair of the Virginia Economic Recovery Commission, he helped pass permanent pro-business reforms and was co-founder of the Northern Virginia Technology Council.

President Obama nominated Rep. Beyer to serve as Ambassador to Switzerland and Liechtenstein in 2009. He used his position to advocate for stricter sanctions to compel Iran to begin nuclear disarmament discussions. As Ambassador, Rep. Beyer was integral to US Department of Justice efforts to halt the abuses of Swiss bank secrecy by wealthy Americans.

Rep. Beyer has spent four decades building his family business in Northern Virginia after a summer job at a car dealership in 1974. He is a graduate of Williams College and Gonzaga College High School in Washington, DC. He was named a Presidential Scholar by President Lyndon Johnson.

Rep. Beyer has four children and two grandchildren. He and his wife Megan live in Alexandria, Virginia.