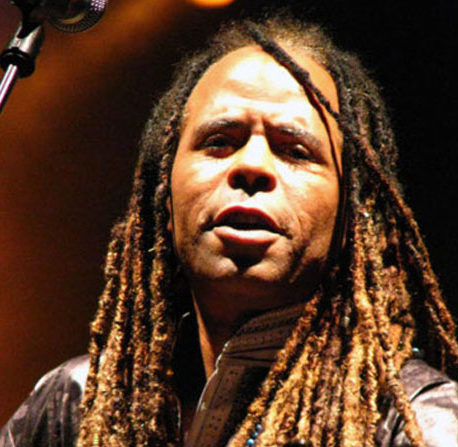 Hassan Hakmoun is one of the most notable figures in contemporary Moroccan music.

Though schooled in the deeply traditional sounds of the Gnawa people in his native Marrakesh, since moving to the U.S. in 1987, his music has absorbed elements from a variety of popular styles, from jazz and “world music” to neo-classical contemporary Western music and cerebral pop, resulting in a diverse, award-winning and critically acclaimed body of work. His participation in such internationally renowned arts festivals as WOMAD (World of Music, Arts and Dance) and collaborations with respected artists, including David Sanborn, Peter Gabriel, Don Cherry and The Kronos Quartet, among countless others, have brought him further into the spotlight and inspired many artists from North Africa and around the globe to follow in his footsteps.

As a master musician whose vision and contributions have enabled a unique fusion and blending of traditions, cultures and genres in a world of ever-expanding global communication and exchange, his work maintains its profound and enormous capacity to joyously inspire and heal the individuals and communities it reaches, as Hakmoun undoubtedly remains a commanding and intriguing artist in the world music scene.

Hakmoun’’s musical origins are rooted in the African folk music of the Islamic Gnawa sect, descendants from West African slaves brought to North Africa several hundred years ago. Their music combines complicated West African syncopations with long, sinuous North African melodies. Tracing their roots back to the Bilal, a freed slave known for his beautiful voice and believed to have been chosen by the Islamic prophet Mohammed to serve as the first muezzin to call the people of the faith to their prayers, Gnawa musicians often express their religious devotion through their music, using it to enter into spiritual trance states.

These rich, ancient Gnawa traditions have powerfully and intimately influenced Hakmoun’s early life and calling as a musician as his mother is a mystic healer known throughout Marrakesh for her derdeba trance ceremonies, often all-night affairs involving hypnotic playing and chanting to exorcise spirits. Steeped in Islamic mysticism and West African rhythms, the Gnawa musical form and its rituals lift the spirit and heal the sick and wounded through its songs of praise.

Hakmoun began learning Gnawa music after witnessing his first trance ceremony at the young age of four. Through a miraculous incident involving his younger sister, whose body was mysteriously touched by the spirit, covered in cigarette burns and then healed as a result of a meeting of the local Gnawa masters who proceeded to gather and conduct a ceremony of singing, drumming and playing instruments such as the sintir while asking for forgiveness and inquiring as to the cause of her ailments, Hakmoun proceeded to study percussion, as well as traditional trance-inducing dances.

He eventually chose the sintir as his main instrument, a three-stringed lute with a body made of camel skin stretched over nutwood. The strings of the sintir are pitched low, enabling the instrument to serve as the bass foundation much like the Western string bass, while its tone is sweet, making it well-suited to carry the melodic line of a composition. By drumming on the body of the instrument, Hakmoun added his own percussion while contributing vocals, thereby creating a unique foundation for his musical explorations and growth. By the age of fourteen, he was an established musician performing at Gnawa lila ceremonies with his own ensemble.

Hakmoun made his U.S. debut in 1987 at Lincoln Center in New York City with Etian and Blanca Lee’’s Trio Gna & Nomadas dance group. He subsequently relocated to New York where he was warmly received and supported in adapting to his new life with the help of such renowned artists as composer and producer Richard Horowitz. He quickly became a regular fixture in New York’s rock, jazz and fusion scenes, earning his following for spanning multiple genres with his spiritually charged voice and playing.

In 1989 Hakmoun became part of the group Magmouat Hakmoun with his brother Said and relatives Mohammed Bechar and Abdel Hok Dahmad. Later that year, with help from Robert Browning and the World Music Institute, Hakmoun produced and released his debut album Fire Within. Among the adventurous New York musicians who became attracted to Hakmoun’s Gnawa sound early on were percussionist Adam Rudolph and jazz trumpeter Don Cherry. Together they made a groundbreaking Gnawa jazz fusion recording, Gift of the Gnawa.

For both musical and commercial reasons, Hakmoun began to expand his musical range, adding American sounds to the Moroccan form. This led him to form the group Zahar, meaning ‘luck’, whose music fused elements of rock and jazz with African styles, resulting in a completely new sound.

With the ensemble, Hakmoun recorded his first album featuring electric instruments and continued to perform at prestigious venues around New York City, which allowed him to expand his network of relations and influences and opened the path toward future collaborations and endeavors. One such instance occurred during a performance at the Knitting Factory, whose audience members included the legendary Miles Davis, and one of Hakmoun’s musical heros, as well as famed producer Daniel Lanois, who proceeded to introduce Hakmoun to an important future collaborator, pop musician Peter Gabriel.

In 1992 Hakmoun joined Gabriel’s WOMAD, founded in 1980 to celebrate the world’s many forms of music, art and dance. Under its wing, Hakmoun was able to spread his Moroccan fusion throughout the world and recorded/released another album, Trance, at Gabriel’s Real World Studios in Bath, England. From Bath, Hakmoun toured Europe, the Middle East and the U.S. along with other WOMAD artists, including performing under the group’s auspices at the Woodstock festival in 1994.

With his mounting popularity and success throughout the world, Hakmoun became widely recognized for his work. His albums Fire Within, Gift of the Gnawa and Trance

topped the charts for World Music Albums, World Music Charts Europe, New World and CMJ’s Radio Top 150 and were selected by Rolling Stone as one of the “Hot Picks of ’94. His powerful performances and sounds also resulted in letters of admiration from former New York City Mayor David Dinkins, television host Jay Leno and saxophonist David Sanborn, as well as from executives at the New York Times and the British Broadcasting Corporation.

In 2002 Hakmoun teamed up with American-born producer Fabian Alsultany to record a new album, The Gift, bridging Gnawa with Arabic music while maintaining a forward-looking sound. Continuing to bring the healing traditions of the Gnawa music to an even wider audience, the album included the release of the life affirming single, “This Gift,” a remarkable and timely duet with Grammy-winning singer-songwriter Paula Cole.

In 2003 The Gift received an INDIE award for “Best Contemporary World Music Recording” from the Association for Independent Music (AFIM), who has honored and recognized many of the best and brightest stars in independent music, including recordings by such well known artists as Sugar, Burning Spear, Naughty By Nature, Professor Longhair, Kate Wolf, Leon Redbone, Queen Latifah, Richard Thompson, Holly Near, James Cotton, Sweet Honey in the Rock, Alison Krauss, George Winston, Frank Zappa, Robert Cray and many more.

In addition to producing his own albums, Hakmoun has contributed to other artist’s recordings, adding the traditional Gnawa flavor and his unique and gifted vocals to such projects as “Caravan” for Dee Dee Bridgewater’s album Prelude To A Kiss, Ozomatli’s Street Sings, which won the award for “Best Alternative Music Album” at the Latin Grammy Awards in 2005 and “Lovelight” for Paula Cole’s Courage in 2007, to name a few.

Hakmoun has also composed and recorded for several films such as Rendezvous in Samarkand directed by Tim Bridwell, The Past and the Present of Djemma El Fna by Steve Montgomery and the documentary Footsteps in Africa. Beyond his musical talents, Hakmoun appeared in several movies as an actor, dancer and musician, including Disney’s Jungle 2 Jungle in 1997 and Rollerball by John McTieman in 2002.

Today Hakmoun continues to record and perform in major festivals and venues around the globe, as well as give master workshops in universities. Most recently, Hakmoun started a project collaborating with other percussive dancers to create a new style of Gnawa dance.

Hassan Hakmoun is regarded as a trailblazer for many young Gnawa musicians who have sought out connections with the world beyond their traditional heritage and milieu. In the age of ambient club, trance and hip hop, he revels in the world’s musical melting pot.