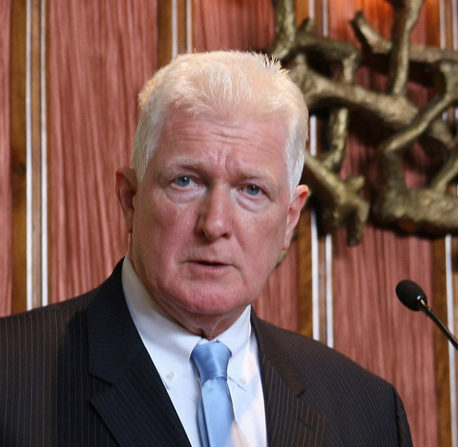 Congressman Moran first ran for Alexandria City Council in 1979. In 1984, he successfully ran for Mayor of the City, serving in that position until running for Congress in 1990, winning an up-hill race against the favored incumbent Republican.

During his time in Congress, he was a leader on the Appropriations Committee, bringing billions in economic investment to Northern Virginia to assist underserved communities, build up the region’s transportation infrastructure and create thousands of jobs, particularly in the defense and intelligence communities. He played a major role in funding the Woodrow Wilson Bridge Project, Metro to Dulles, widening of Route 1 to Fort Belvoir and construction of numerous local road, bridge, environmental and public transit projects. The front page of the Washington Post this past November cited the fact that “companies based in Representative James P. Moran’s district in Northern Virginia reaped $43 billion in federal contracts – roughly as much as the entire state of Texas.”

A vocal, active champion for progressive policies, he was one of the very few who opposed the Defense of Marriage Act in the early 1990’s before it was politically popular to do so and championed eliminating the discriminatory “Don’t Ask, Don’t Tell” policy in the military. He has strongly supported a woman’s reproductive rights throughout his career, and is a staunch supporter of stronger gun safety laws. He chaired the Animal Protection Caucus, which helped enact bans on animal fighting, horse slaughter, animal abuse videos and the sale of cat and dog fur. On the environment, he has been a relentless voice for strong and sustainable policies, both regionally and nationally. He led the opposition to drilling off the Atlantic Coast, has fought to protect the EPA and Interior Department from deep and debilitating budget cuts and successfully pressed for funding to address endocrine disrupting chemicals in the Potomac River.

Jim Moran SpeechAn outspoken opponent of the Iraq War from the very beginning, Moran helped lead opposition in Committee and on the floor to what he deemed a war of choice whose outcome would not strengthen American security but rather align Iraq with the Shiite dominated Iran. He authored the “Strategy for Success” amendment to the FY’05 Supplemental Appropriations bill, which, for the first time, required the Pentagon to provide a detailed assessment of US and Iraqi military capabilities was required of the Pentagon, the results of which strengthened arguments for ending the war. And when our soldiers began returning from the battlefield, he championed funding for PTSD research, treatment and care, cancer research due to hazardous exposure on the battlefield and traumatic brain injury treatment through the Defense Department budget.

Federal employees had a perennial advocate for the issues affecting their livelihood in Moran. He continues to champion federal pay parity, authored with Congressman Wolf the bill to ensure furloughed civil servants during this year’s shutdown received back pay, sponsored the law allowing unused sick leave to count towards retirement annuities, and a number of other measures strengthening federal worker benefits, including introducing and funding the first transit subsidies. Under fire from conservatives, he took to the House floor time and again to defend what he deemed the “greatest civil service in the world.”

Jim Moran StacheMoran has matched these principles with the understanding that a strong economy is critical to achieving progressive priorities. In 1996, he co-founded the New Democrats, today one of the largest caucuses in the House. Through the New Dems, he has supported free and fair trade that has been an economic driver for our export heavy region, and has been active on a range of issues promoting a stronger, center-left vision for our nation’s economy.

In January 2015, Moran founded what is now Moran Strategy Group. The following February, Moran left the day-to-day operations of Moran Strategy Group to accept a position as Senior Legislative Advisor at McDermott, Will, and Emery. In March 2016, Moran was appointed Professor of Practice in the School of Public and International Affairs in the College of Architecture and Urban Studies at Virginia Tech.

Mr. Moran is a father of two sons and two daughters and the grandfather of four.