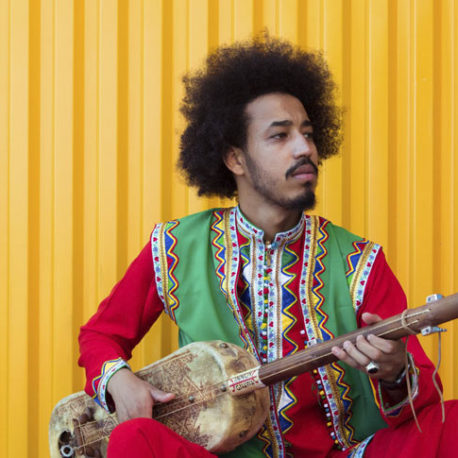 Samir LanGus, is a Grammy nominated musician, born and raised in the city of Agadir, Morocco. Music has always been a part of the constant variety of street sounds of his city, from merchants to entertainers and calls to prayer. LanGus began learning Gnawa, a traditional, spiritual trance music, when he was 8 years old from the Gnawa masters of Morocco.
​
For the uninitiated, Gnawa music is the ritual trance music of Morocco’s black communities, originally descended from slaves and soldiers once brought to Morocco from Northern Mali and Mauritania. Often called “The Moroccan Blues”, Gnawa music has a raw, hypnotic
power that’s fascinated outsiders as diverse as writer/composer Paul Bowles, jazz giant Randy Weston and rock god Jimi Hendrix. The music is utterly singular, played on an array of unique instruments — from the lute-like Sintir that the band leader uses to call the tune, to the metal Qarqaba, Castanets with which the Kouyos (chorus) keep time and pound out clattering, hypnotic rhythms. The music is believed to heal people possessed by jinn, or spirits.
​But “Gnawa is not just the music,” says Samir. “It’s the culture. You can’t play just the Sintir, you also need the castanets (Qarqakeb) to have the Gnawa spirit.” He describes the Sintir, a stringed percussion instrument made of wood and camel skin with goat gut strings, as a “powerful instrument” with an amazing sound. “You feel it in your heart,” he says.
​
LanGus makes great use of this traditional repertoire, and adds his own, contemporary spin with additional jazz instrumentation. Taken as a whole, this exciting new artist fuses a centuries old North African tradition with the pulse and attitude of New York City now. He would like to improvise with Berber, Indian, Saharan, and even Flamenco music playing a mix that keeps the Gnawa tradition with an added flavor.