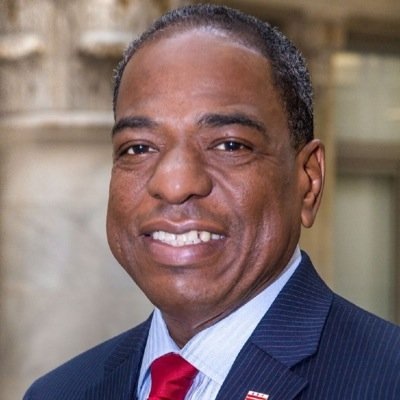 Vincent Bernard Orange Sr. became President and Chief Executive Officer of the DC Chamber on August 15, 2016, bringing with him unparalleled experience in the non-profit, for-profit and public sectors.

An advocate for balanced, informed business regulations that compete effectively with businesses in surrounding jurisdictions, Mr. Orange works to foster an environment of business growth and economic development for the District.

Mr. Orange is committed to increasing the Chamber’s engagement with all levels of membership and bringing business, government and the community together to reap the benefits that only a dynamic business environment can provide.
Background
Mr. Orange is an attorney, certified public accountant and former elected official who served two terms on the Council of the District of Columbia, representing Ward 5 from 1999 to 2007 and serving as an At-Large member from 2011 to 2016. He was elected in a special election on April 26, 2011 and re-elected to another four-year term on November 4, 2012. As an at-large member, he represented all eight wards of the District and served as the chairman of the Committee on Business, Consumer and Regulatory Affairs.

Mr. Orange was a very active councilmember, and his accomplishments include championing the passage of legislation to implement a minimum wage of $15 per hour for District works in 2016. He also saw through to enactment laws to establish sick-leave pay for tipped wageworkers, a smoking ban within 25 feet of a playground, reopening McKinley Tech as the McKinley Technology High School, recognizing by law American Sign Language in the District, securing textbooks for core subjects for DCPS, and instituting protections against wage theft.

Mr. Orange holds a B.S. in business administration and communications from the University of the Pacific, a master’s degree in taxation from Georgetown University and a J.D. from Howard University.

On November 30, 2016, he received the Ready, Willing & Working Award for having a positive and lasting impact on the lives of the District’s Clean Teams. On December 1, 2106, he received the Certified Business Enterprise Recognition Award from the Certified Business Enterprise Collaborative for championing the establishment of a “one billion dollar expendable budget for goods and services” to be spent with District businesses, and a Certificate of Appreciation from the DC Department of Small and Local Business Development in recognition of ongoing contributions and years of work as a leader and champion of District small businesses. Mr. Orange concluded the year with being named one of the Washington Business Journal Power 100.

On January 18, 2017, Mr. Orange was inducted into the DCTV’s Hall of Fame, an award honoring a person or organization that has made extraordinary, sustained and lasting contributions to DCTV and the public-access media community.